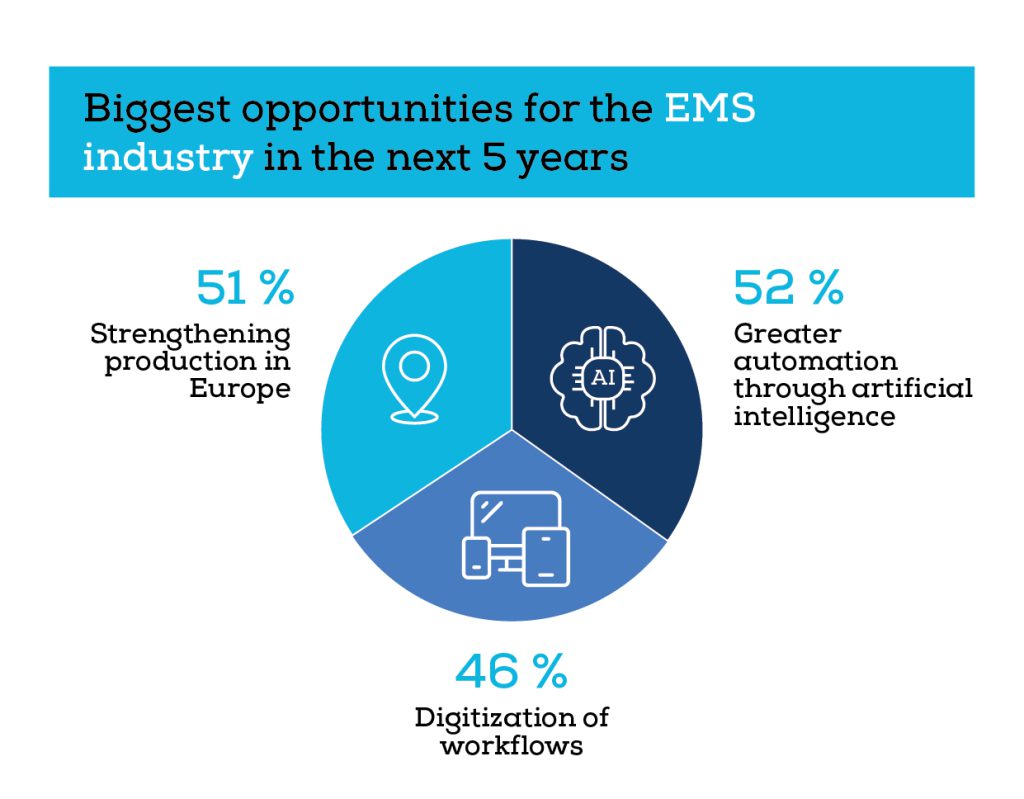 KATEK SE, together with market research institute Dynata, surveyed 570 companies and electronics manufacturing service providers (EMS) in Europe about the future of the electronics industry.

Among other things, the study examined the importance of Europe as a production location, the topics of sustainability and CO2 reduction, as well as the demands on the technological know-how of electronics service provider and efficiency potentials through artificial intelligence and automation. Key findings: Across all industries, strengthening manufacturing in Europe was cited almost equally with greater automation through artificial intelligence as the biggest opportunity for the EMS industry over the next five years. When selecting an EMS partner, most companies pay attention to the service provider’s technological know-how as well as its industry expertise and references. Technological know-how is also the most frequently named challenge in the development of new products. However, a lack of in-house expertise as well as miniaturization and the composition of parts are also viewed critically by around a third of those surveyed. Currently, the CO2 emissions of the electronics partner are still of little relevance. The sectors surveyed are divided into electronics industry, IT & services, automotive, mechanical engineering & industrial engineering, industrial automation, telecommunications and renewable energies & environment. 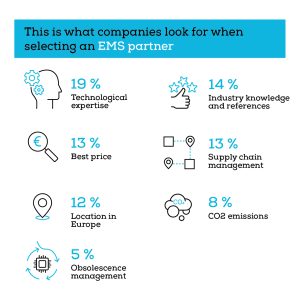 Changes in the EMS industry: technological know-how before price

Until now, the EMS industry has been heavily influenced by price decisions. Now, however, the topics of technological expertise as well as industry knowledge and references are most important for selecting an EMS partner. For respondents in the automotive industry, the location in Europe is currently the most important factor when selecting an EMS service provider, followed by the lowest price, which is just as important as technological expertise and supply chain management. In the “IT & Services”, “Mechanical & Plant Engineering” and “Renewable Energy & Environment” industries, technological expertise is cited most frequently when it comes to choosing a manufacturing service provider. Currently, obsolescence management is the least relevant factor when it comes to selecting an EMS partner, followed by CO2 emissions.

Know-how is the decisive factor for the electronics industry in the coming years. However, almost 40% of the respondents see the lack of know-how in product development as a challenge for the EMS service provider, followed by in-house know-how. In addition, one-third each rate the issues of miniaturization, the resulting lack of space for electronic components and the composition of parts as difficult. 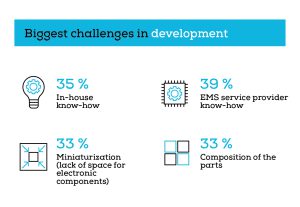 The automotive sector sees the biggest opportunity in the EMS industry over the next five years as greater automation through artificial intelligence. Just under half of respondents also see strengthening production in Europe as a major opportunity. Those responsible in “IT & Services” see it similarly, with the digitalization of process flows playing just as important a role here as a European location. In the “Industrial Automation” sector, almost 70% of respondents agree that the greatest opportunity lies in strengthening production in Europe, followed by automation through artificial intelligence. For most of the participants from the telecommunications industry, on the other hand, the digitization of workflows will play the most important role. The electronics industry itself sees the topics of automation through AI and strengthening production in Europe as the greatest opportunity in the next five years, with 52% each.

About the study: KATEK, together with the market research institute Dynata, surveyed 570 companies and manufacturing service providers for electronics or electronic components (EMS) in Europe (Germany, Austria, Switzerland, Italy and Spain) in April 2022. One third of the respondents each represent a company with less than 500 employees, between 500 and 1,000 and more than 1,000 employees from the electronics industry, IT & services, automotive, mechanical engineering & industrial engineering, industrial automation, telecommunications and renewable energies & environment sectors. 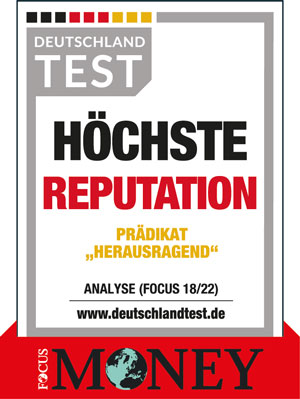